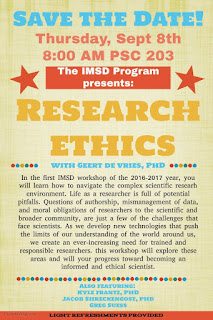 The first workshop of the new semester focused on ethical issues in an academic setting. Dr. Geert de Vries, PhD, led the discussion, opening with the regulatory bodies that most research encounter at an academic institution: IRB for oversight of human subjects data and IACUC for oversight of the use of animals in research.

The Scholars then took to the task of thinking of the ethical issues that they might face as researchers. Scientific misconduct, plagiarism, fabrication, falsification, and questions of authorship were all topics that were broached.

Finally, as an example of the ethical dilemmas facing the research community. Dr. de Vries took on the topic of nootropics, or cognitive enhancers, and their development. The group dug into the moral dilemmas that this technology brings about in the workplace and in the academy. As a group, we discussed how explicit and implicit coercion played a role in the discussion, along the concept of socioeconomic bias and questions of personhood in the context of these agents.

The workshop finished up with a thought question that I’ll leave here to conclude this post:

“As researchers, how do we keep from doing ill in the world?”