Though a recent term, adaptive reuse as a concept dates back to the mid-twentieth century, springing out of the urban planning war being waged by New Yorkers Robert Moses and Jane Jacobs. Evaluating whose core principles of design set forth the best structure for urban planning and policy could easily fill books, much less another built environment analysis, so to simplify matters, this analysis will settle for an admittedly oversimplified view of what both represented. Moses looked at the city on a larger scale. He was preoccupied with improving traffic, building massive infrastructure projects like highways, bridges, and tunnels. Jacobs, on the other hand, prioritized the small elements of cities: the communities, the culture, history, and other intangible factors.  While Moses has undoubtedly left an almost permanent mark on the American map, modern developments like adaptive reuse may have given Jacobs the edge in posterity (Sheir).

As Moses fought for demolition and replacement, Jacobs advocated for repurposing old buildings for new purposes. This idea would later be named adaptive reuse (Carswell). 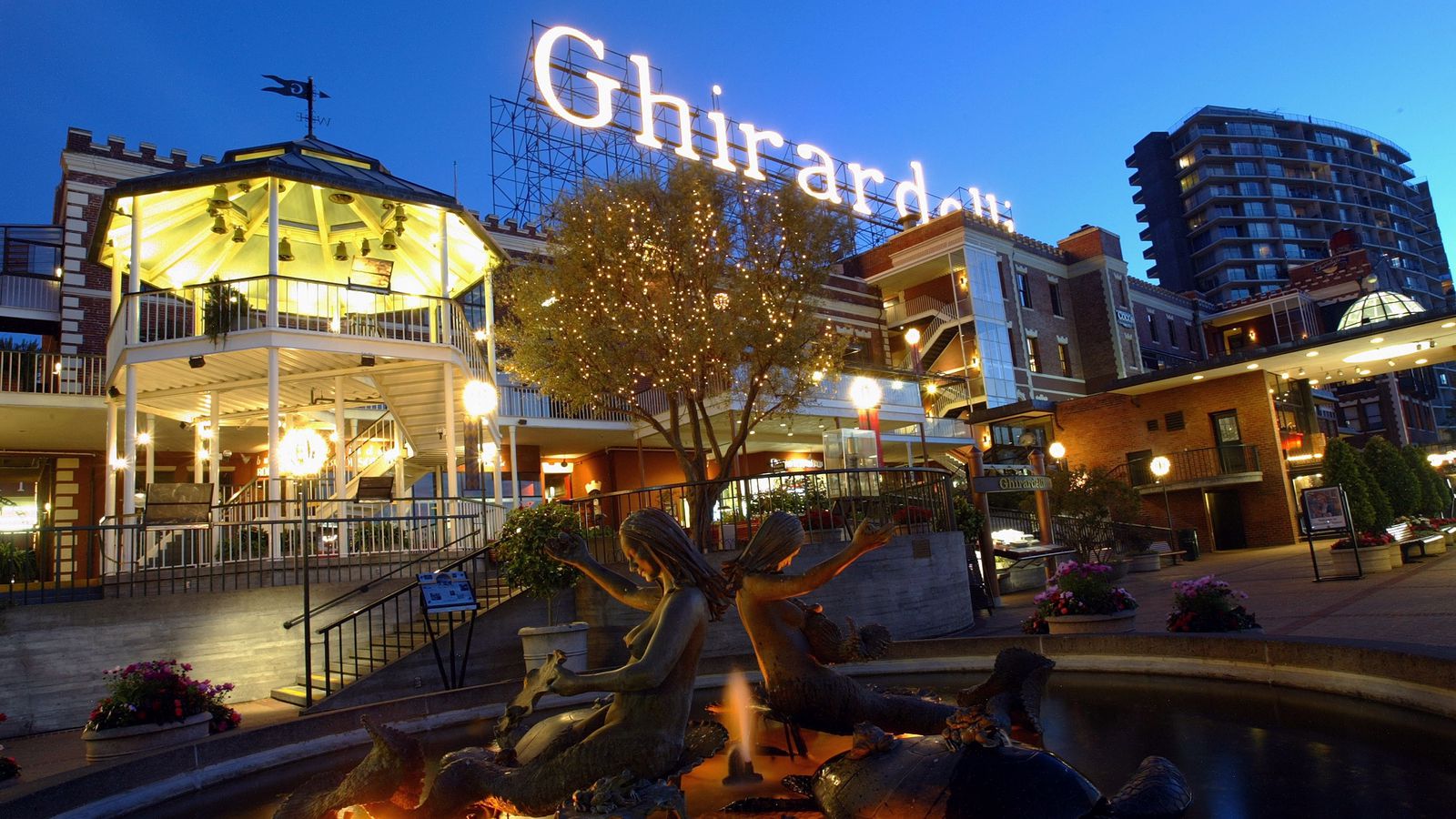 Although it would take until the twenty-first century before adaptive use became a solid and understood concept, examples of it appeared throughout the second half of the twentieth century. Many cite Ghirardelli Square (a former chocolate factory turned shopping center) as the first instance of adaptive, or urban reuse, the project occurring in the 1960’s. The first wave of adaptive reuse hit New England in the 1980’s. Abandoned mills, relics from a long-ago textile boom, were converted into museums (like the Massachusetts Museum of Contemporary Art) or residential areas. The beginning of the new century saw large-scale adaptive works capture the public eye in projects like the High Line in New York City. Thus, adaptive reuse has emerged as a prominent principle and strategy in urban design and redevelopment (Carswell; Birge-Liberman). 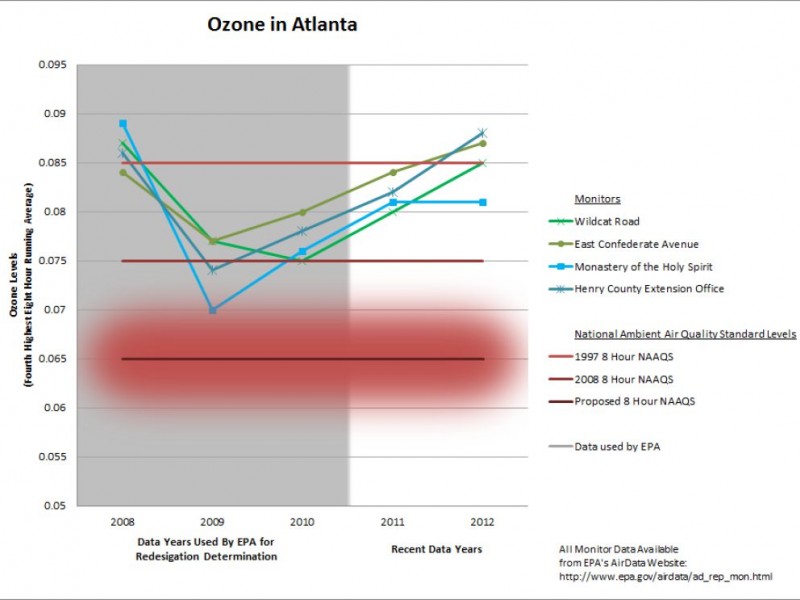 A chart showing pollution levels in Atlanta. The three lines are different estimated levels. The red range underneath is the range that NAAQS considers safe.

The possibilities of adaptive reuse have captured the imaginations of urban citizens across the world; however, it seems to have caught Atlantans even more so. After all, it represents a unique type of hope for a city has long been dominated by “sprawl” (constant expansion of urban and suburban areas and roads). To demonstrate the sprawling woes of Atlanta, the city has the second highest amount of streets per capita, yet suffers the nation’s fifteenth worse traffic. It is the least densely populated metropolitan area in the country but between the period of 1982 to 1992, increased the rate of deforestation by 38% to develop more low-density residential areas, contributing to Georgia’s status as the state with the third highest amount of deforestation. All of these factors have contributed to chronic air and water pollution, Atlanta having been ranked 18 on a list of American cities with the lowest air quality (Kundell and Myszewski). Publications including The New York Times and Politico have consistently labeled Atlanta as the “poster child” for sprawl.

Beyond the environmental and transportation issues lie a long history of demolition and replacement, an absence of redevelopment or adaptation. As just one example, the Civic Center was supposed to be a city marvel, but today it stands useless, devoid of activity as it razed mixed-use structures with parking lots and oversized highways. Before its construction, the site was a community known as Buttermilk Bottoms, populated mostly by African-Americans. The city bulldozed the entire community and replaced it with a building that quickly became obsolete and currently burdens the city more than anything (Pendered). Atlanta Mayor Kasim Reed has worked to redevelop the site into one that focuses on green spaces and mixed-use, but these plans continue to fall through (Allison).

Nevertheless, one project did come along that battled its way into existence and the hearts of Atlantans: the Beltline. The Beltline, a prime representation of urban reuse, was based off a thesis by Georgia Tech student Ryan Gravel from 1999 that evolved into a proposal for a 33-mile trail that aided pedestrians and rail transit using the 22-mile rail corridor that encompasses Atlanta as a foundation. The project has been in development for several years and will continue to be in progress for quite some time, but it has already managed to impress itself upon the city and earn international attention and acclaim (“Atlanta BeltLine Overview”). For a city so long dominated by destruction and sprawl, it welcomed the possibility of a new era focused more on adaptation and sustainability. However, projects like the Beltline can have tangible and powerful benefits outside of mere aesthetics. Research has started to show that green spaces can significantly impact personal and public health. In a myriad of ways, these areas improve personal health, like:

Further, these factors can expand to better the healthiness of the entire city, including:

And research has also suggested that green spaces can increase social activity, strengthen communities, and reduce cities’ budgets by decreasing infrastructure budgets (Health in the Green Economy: Transport Sector; How Natural and Built Environments Impact Human Health). Of course, the urban environment presents the challenge of finding space to do that, so revitalization projects offer a solution to that problem, taking abandoned spaces and generating a public good.

Another feature that many cities strive for is historic preservation. After certain buildings have outlived their uses or origin, many citizens still see a benefit in retaining the foundations of these buildings to preserve the history and culture of the city. Since this process requires that old buildings be repurposed for modern demands, adaptive reuse is a process inextricably tied to historic preservation (Birge-Liberman). After all, the Beltline preserves the foundation of the Atlanta rail corridor, the impetus for settling the city. Or there’s Ponce City Market. Now a hub of shopping and eating, the hulking building was once a warehouse and distribution facility for Sears. The building marked something important to the city’s history, but a building of such a scale offers no obvious service in the modern world.  Instead, the city has transformed it into a building that can supply current demands like parking and shopping while maintaining a landmark in city history (Weible).

Sadly, nothing can be truly this idealistic. Despite widespread positives, we still have to consider what problems come out of this policy. Perhaps the biggest critique originates in one of society’s favorite buzzwords: gentrification.

The word has gained lots of connotations and meanings. In fact, Emily Badger of The Washington Post a few years ago denounced the term as emotionally loaded and without real meaning. While I happen to agree with Ms. Badger’s analysis entirely, for convenience sake it makes more sense to use the word under a standard working definition. Thus, I will define gentrification as a consequence of city planning that leads to wealthier, and generally more privileged, people to move into a city and drastically change its culture and raise prices, especially in the home market (Badcock; Hayes). Regarding Atlanta, several have expressed concerns with how the Beltline might affect rent prices for low-income households already residing near the Beltline. Recently, Atlanta has been recognized as a leading city for gentrification, and the Beltline has been seen as exacerbating that problem (Blau). Just a month ago, Ryan Gravel, the visionary behind the Beltline, resigned from his position on the Beltline board because he worried that the organization was not acting sufficiently to expand and protect affordable housing (Stafford).

Furthermore, it must be considered that urban reuse does not welcome everyone. Many of these old buildings were not built with broad demographics in mind, particularly the disabled. Several of these buildings rely on steep staircases and narrow hallways that give little room for wheelchairs. Or some buildings feature only one bathroom on each floor because the construction did not account for women (the merits of binary bathrooms is a subject for another time). Or, the buildings utilize hazardous or ineffective materials that cannot adequately cater to modern needs (Carswell). The perceived nobility of adaptation may obscure the stark realities that complicate these issues.

Lastly, we need to consider what kind of moral relativism much of this analysis relies on. I agree with many writers and professors of mine who advocate for urban reuse. However, other perspectives exist, and though it may seem clear to me or others that historic preservation possesses intrinsic value, not everyone thinks that one. Though I disagree with the philosophy of Objectivism and Ayn Rand firmly, her ideas and similar ones have significant followings who assert that the government has no role to play in preservation or who disagree that preservation is even a good thing. When evaluating adaptive reuse moving forward, it might be necessary to look at things in an objective or utilitarian prism that prioritizes function or practicality. It may be the colder option, but maybe the most realistic one.