Historical Photos: Why It’s Nice We Can’t Always Geotag Them

Recently I met with two of the heads of the SIF program, Joe Hurley and Brennan Collins, concerning the photo geotagging project. The photo geotagging project involves determining the location where various photos from the GSU Digital Collections were taken from. The meeting focused on what collection should be tagged; we decided on using the Lane Brothers Photographs. This collection consists of over 15,000 photos of people, places , and events from all over Atlanta. Photos range in time from the 1930s to the 1970s. As an Atlanta transplant (I was born and raised in Phoenix, Arizona where I lived until about two years ago) these photos provide interesting snapshots of Atlanta history, which is all the better for a city not known for preserving its historical landmarks.

Two photos stuck me as particularly interesting, but for very different reasons. The first was from downtown Atlanta in the late 1930s (shown below). In the photo you can see basically every form a transit used today. You see the old streetcar, cars, bikes (in the center background), and pedestrians walking. Were it not for the cars and the streetcar (and general lack of development) you’d hardly know the photo wasn’t from today. However, when you compare the Lane Brothers Photo to the same spot from today (Google Street View, just search 101 Marietta St and it’s the building across the street from the State Bar) you can see a striking difference. The cars and building all have a more angular, modern feel. This juxtaposition shows us how the city and our tastes have changed. Being able to look at the same location at two very different points in time can give all Atlanta residents an interesting perspective on their city’s development over time, which is why this photo geotagging project is so worthwhile. 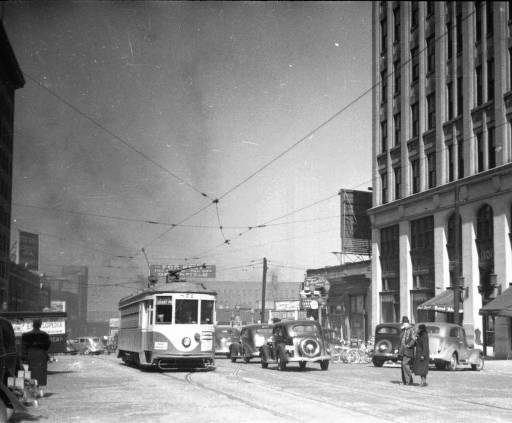 The other photo we looked  at from the collection that I found so interesting was taken somewhere in Atlanta, in either the 1940s or 1950s. The photo (shown below) is of an alley. You can see what appears to be an early to mid-century truck of some kind in the background. The buildings have a distinctly pre-war feel to them: brick constructions, small windows, unpaved alleyways, et cetera. But what struck me about this photo was all the things that we don’t know about it. We don’t know where this photo was taken, what the buildings are (business or homes or whatever), or even what decade the photo is from. We will not be able to geotag this photo. There are no street signs and the likelihood that those buildings even still exist are pretty low. 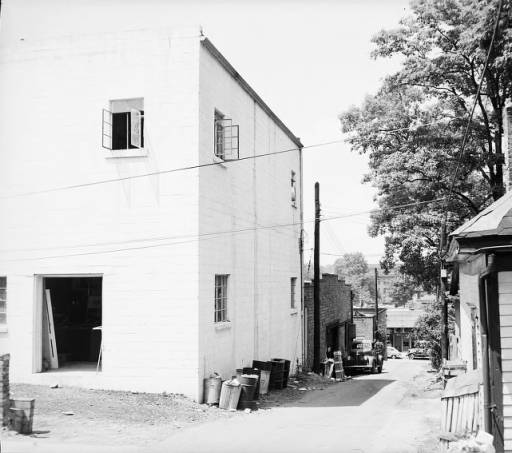 This photo is not very interesting to look at but the idea that we have no conception where this photo is from strikes me. Today if you take a photo with a connected device (and let’s be fair if you are reading this you almost certainly take all your pictures with your phone) the photo is automatically geotagged via a GPS. While there is value in that, now we will always be able to locate where a picture was taken, I think we’ve lost something too. I find something captivating in this photo. This notion that in this photo you get to see a place that you will never be able to find is oddly romantic to me. With this photo I get to see a part of my newly adopted city. A part that can show me a simpler time in the cities history. A part that I can’t compare with today because I can’t find it now. I know there is value in knowing where historical photos come from spatially (that’s why I’m glad SIF will be starting on the geotagging project next semester) I think there is also value in seeing snapshots of history that we can’t quite place. I fear that mystique will be lost for future generations when they look back on pictures we take today. Maybe only I’ll care, but I genuinely think we might just be losing something. So maybe next time you see a beautiful scene, or even a mundane scene you think is worth capturing, turn off your phones GPS. Maybe, just occasionally we should let future generations look back on the picture we leave and think, “Huh, I wonder where this picture is from?”