It’s not often that I stumble upon something that, as a historian, stops my breath for a few moments. It’s even more rare I stumble upon something that stops my breath as a person. Yet, here it was, sitting on a wall in Manuel’s Tavern, an image that made me stop dead in my workflow. I must have walked past it hundreds of times back when I spent time at Manuel’s regularly, and never noticed it, partly obscured as it is. How I never noticed it, I’ll never really know. Yet here it was, with a simple label that, for those unknowing of auto racing history, would mean virtually nothing. Here it was, an image of the death of Pat O’Connor. Warning, this post may include images and descriptions of death.

Pat O’Connor, born in North Vernon, Indiana, began racing in May of 1948 in the roadster races run at Columbus, Indiana’s Columbus Speedway. With a quickly successful series of wins, by 1951 he moved to the American Automobile Association (AAA) Midwest sprint car series, placing third for the season in his first year. At tracks like Dayton, Ohio’s Dayton Speedway, and Salem Speedway in Indiana, he consistently dominated the fields. Despite several poor finishes in the 1953 series, he consistently placed high in the overall series points to win the Midwest Championship, and in 1954 became the first driver to win the Midwest Championship more than once. He would repeat this performance again in 1956 with his third Championship with the series, now called the United States Auto Club (USAC). 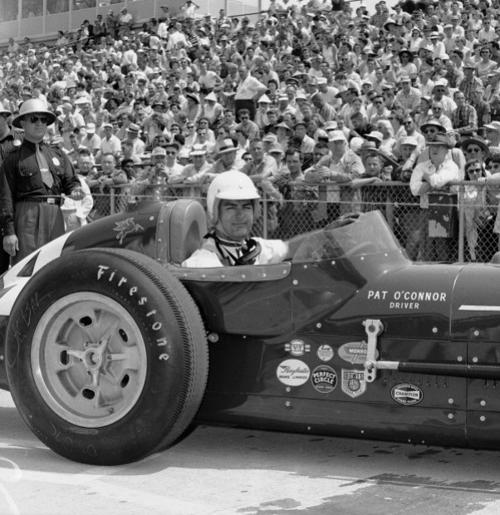 Pat O’Connor in his Sumar Special, May 17, 1958, after qualifying at the Indianapolis Speedway.

O’Connor’s rather meteoric rise to fame continued in 1956, where he won his first national championship race at Darlington Motor Speedway in South Carolina on July 4th of that year. With this national win under his belt, Firestone Tires brought him to the famous Monza two-mile track in Italy to test tires for the company. Having seen his 170 mph track speed averages during the tests, suddenly O’Connor found himself in demand by both US and European racing teams. Up until the 1958 season, O’Connor continued to run both the sprint car series he had begun in, and the Formula 1 series races. However, he decided to forgo the sprint races until after the 1958 Indianapolis 500.

It is a stark reminder of how dangerous auto racing was, and can continue to be, to see the list of drivers that met their ends on the tracks of the world. The 1950s are considered to be one of the most dangerous periods of auto racing history. Of the sprint drivers and Formula 1 drivers that O’Connor drove against, an unfortunately high number were killed in accidents each season. O’Connor’s move away from the sprint cars he started in is often attributed to the death of longtime rival in the series, Bob Sweikert. One often cited fact is that of the 33 drivers who qualified for the 1953 Indianapolis 500, nearly half of the field would, at some point, die on a track. Of those who did not quality for it that year, more than half a dozen would also die in racing accidents, with several others suffering career ending injuries, over the following decades. Included in those who failed to qualify that year was Pat O’Connor.

The accident that would involve 16 cars and claim the life of Pat O’Connor began due to a confused start. As was standard at the time, the starting grid began in single file, and was instructed to form the normal eleven three car wide rows once on the track. However, the first row, consisting of Dick Rathmann, Ed Elisian, and Jimmy Reece, pulled away from and passed the track pace car, quickly catching the back of the pack as it pulled out onto the track. The chief starter, Bill Vanderwater, waved off the first start attempt, instructing the pack to reform correctly. The front three drivers moved forwards, and took the front row. On the second approach to the starting line, Vanderwater gave the green flag to begin the race. The first three cars quickly pulled into a tight line, with Rathmann in first and Ed Elisian in second. Approaching turn three, Elisian spun, catching Rathmann, and both cars lost control. With the rest of the field close behind them, the resulting accident snared 16 cars in total, causing multiple injuries and the death of Pat O’Connor. The accident itself exists in multiple photographic records, from multiple angles and even series of images shot by photographers present at the event. Multiple film recordings also caught the accident from multiple angles. But what the films and images also caught, which hung in the mind of race fans everywhere, was the burning car of Pat O’Connor. After having impacted the car of Bob Veith, who had hit Jimmy Reece, Pat O’Connor’s car rode up the nose of Veith’s car, and was launched nearly fifty feet into the air in a side over side tumble that continued when it impacted the raceway surface, skidding several hundred feet before impacting the race wall tail first. The ruptured fuel tanks caught fire, engulfing the car in flame. The only fortunate thing was that Pat O’Connor was already dead, having died nearly instantly of a skull fracture on the first head down impact of his car. But the image of the burning car stayed with drivers and fans alike.

I grew up traveling the South East and Midwest with my parents who were both amateur road racers. As such, I learned a lot of the history and lore of the sport from them, as well as from their friends. I learned you never wear green on race day, and to not eat peanuts at the track. I was also taught, though not directly, I suppose, that some tracks will demand a price for the glory that comes with their names. Talladega Superspeedway carries the Talladega jinx, and will claim the lives, cars, and careers of those it helps bring to glory. Its most well-known supposed claim is to Bobby Allison, who suffered an accident at the track in 1987, where his car impacted the catch fence at over 200 mph, tore out nearly 100 yards of fencing, and the resulting shrapnel of fencing and car injured several spectators. While Allison survived, one of his two sons, Davey Allison, would be killed in a helicopter crash at the speedway in 1993, while the other, Clifford Allison, would die at Michigan International Speedway. Daytona International Speedway will do the same, often in far more brutal ways than its Alabaman cousin. It has claimed forty lives in its history, the most famous of which was Dale Earnhardt, during the 2001 Daytona 500. SCCA, the series which my parents were involved with, has lost two drivers to Daytona. But no track in the United States demands a higher price than Indianapolis. It has killed seventy-three individuals (42 drivers, one motorcyclist, 13 riding mechanics, and 17 crew, personnel and spectators) in its 107-year history, but to win on the bricks of its finish line is a crowning glory to any driver. Indianapolis has killed more competitors than any other major auto racing circuit in the world, and Pat O’Connor’s death was only one of them. But his death left an indelible mark on the 500, and on modern auto racing. Starting in 1959, three major changes were made to the race. First, the single file start was abandoned, and instead the three wide line would start together for each grid row. Secondly, helmets certified by speedway medical officials would be required for all drivers in the race. And, finally, each car was required to have a metal roll bar welded to the frame of the car behind the driver’s head, which exceeded the driver’s sitting height by a set amount. These changes drastically improved the safety of the event, and were carried forward into nearly all forms of auto racing. The roll bar evolved into the full frame roll cage, a structure of tube metal added to a car frame to improve its durability and prevent crushing during impacts, which further improved safety for drivers. By his death Pat O’Connor likely saved more lives than can be counted.