Bats are generally seen as disease carriers which has given the public a negative image of them. Their connection to vampire lore has also made some people fearful of them.  The article is trying to change the peoples perception of bats buy stating how they are a vital and valuable part of the ecosystem, providing a variety of essential services like pest control and plant pollination. Bats belong to the Chiropteran order which is large and diverse, these creatures can be found at seaside or desserts. These amazing creatures are estimated to save corn farmers 1 billion USD globally by preying on agriculture pests. Researchers have believe that bat boxes would be economically viable for farmers to use compared to pesticide. Yet bats are the victim of turbines, human encroachment, and pesticides. The articles points out how people showed be trying to protect bats considering their important to the environments and how they might if their perception of bats changes.

Sociability is defined as the ability to approach and interact with unfamiliar people. The article is mainly about the study that was conducted to compare sociability and gaze behavior in domestic dogs and human socialized captive wolves in order to identify the relative influence of domestication in the human-dog bond. Gaze behavior is when people or animas direct their gaze to visible hand movement goals. Two experiments were conducted the results were that dogs showed higher levels of interspecific sociability than wolves even when no attention was available.  Studies have shown lifetime experiences are important in the development of the bond between dogs and humans. For example , shelter dogs remained closer to passive unknown humans then pet dogs, but also showed more fear-appeasement behavior. One of the most important consequence of domestication is that dogs and humans have become social partners, the dogs forming an attachment with their owners. 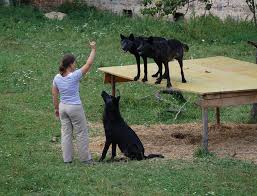 The articles is about the history of animals breeding. Which has a very long history in which farm animals where breed for human benefits. Using a process called selection, in the articles selection refers to the genetic improvement of animals with artificial selection. Recently the practice of animal breeding has become more sophisticated, increasing the speed of production traits. For example, the rate of growth (increased) in animals. However there’s also been some well documented evidence of negative fertility and health issues in high yielding dairy cattle. The author of this article is trying to explore the questions surrounding breeding and welfare. Concluding that there is a better need for an understanding of genotype and the environments effect on health and welfare traits in order to get breeding programs to improve environmental fit in animals.

This article is about how animals( specifically zoo animals ) view us, how it is difficult to determine and most likely more difficult with other vertebrates and harder with invertebrates. Most of evidence of the animals perception is through study of primates. When particular animals and human have a history of interactions, to the extent that they can anticipate how the other is going to behave. It can be assumed that a human-animal interaction has taken place. Relationship is defined as a series of interactions in time between two individuals that are known to each other, and the interactions affects the future course of the relationship.

Human-animal relation( HAR) can be established between individuals animals and peoples, but it’s also possible to conceive a generalized HAR between one person and a group of animals. Hedgier stated 5 ways that humans can be perceived by animals: enemy, prey, a symbiont, a part of the inanimate environment, and as a member of the same species.

The article discuss the subject of learned helpfulness, which is caused by lack of control. Animals in captivity also face this problem. The captivity can lead to serious negative consequences and evidenced behaviorally and psychology. However, the hypothesis is that providing choices to captivated animals may alleviate these choices. Researchers have found that animals all have their own individual preference. Animals like specific food, social partners, and activities. Also, that animals in captivity will work for things they like chimpanzee.

It’s important to understand animals preferences when designing environments and enrichments for them. Researchers have found that having a choice has a positive effect on behavior. Zoo(s) are well equipped to deal with this question, because they usually have animals exhibits with several different locations for the animals. These buildings usually have an indoor and outdoor habitat, one viewable to the public the other is not. For example, when sheep’s where given the option to retreat from the public, they showed lower rates of undesirable behaviors.

The article is about the importance of being able to restrict animals in different places in their enclosure in Animal Management practices. This restriction  causes a decrease in available space, which limits the animals activities and effect their social dynamic. A study of the behavioral, welfare-related responses of two groups of housed chimpanzees proved the importance of providing modular enclosure that provide choice and flexible usage. The study showed that arousal related scratching and yawning decreased as the number of enclosure ares increased. The decrease in arousal related yawning and scratching  shows the the number available areas in the enclosure is more important then the total amount of space .

One of the important elements of animal management is safely being able to move animals between enclosure areas so they can care for the animals needs. Husbandry requirements may temporarily limit the animals to off-exhibit ares for things like: cleaning, maintenance, or animal introductions. This article is by John Mckaughan who describes the “fabulous Fox theater” from its appearance on the outside to its beauty on the inside, and it’s history. The fox theater is located at Ponce de Leon Avenue in Atlanta, GA with arched doorways, minarets, and domes make gives it the illusion of a cluster of buildings. Also a 140 foot entrance that resembles a magic Arabian carpet. Inside is a 65,000 square-foot that is design to resemble a weathered desert tent. The Fox theater has a fake sky that resembles the night sky, with illuminated stars, and projected on clouds.

The Fox theater dominated the performance arts since the great depression. It also had a lot famous perform there like the Atlanta Opera, Mick Jagger, Gypsy Rose Lee and many others. Also it’s home to the Atlanta Ballet, which is the oldest professional company in the United States. The article main point is to describe a historical site that is known for the amazing performances that have and it’s beautiful design. The Arthur of this article does not appear to be bias after all the audience view of the Fox Theater does not benefit him, it just appears to be a informative story. The article is about the historical building on 187 Edgewood Avenue the Coca cola Annex.  A privately owned business not open to the public. Built in 1903 and was home to the New Coca Cola Chewing Gum company. During that time Coca cola tried to sell a diverse line of products. Like gum, cigars , and candy. However the gum was not successful like their soft drink products so it was dropped.

The building is the Annex to the Dixie Coca-Cola Bottling plant company, Atlanta’s Coca cola bottling headquarter. Nowadays the annex is used for housing homeless HIV positive and Aids patients that are receiving outpatient treatment at Grady hospital.

This article helps readers better understand a historical site in Atlanta which is important even today and is useful to society especially to the homeless population.  The reason I choose this site was because it was one of the more detail sites I could find that talked about the Coca-Cola Annex. There is a chance that the source for this article might not be credible. The article by Kellermann talks about how many of our nations public hospitals such as DC General and New Orleans Charity Hospital have closed. When the Grady Hospital appeared on the New York times people begin to assume is was about to close, and it almost did. The hospital was saved at the last minute by Dr. Kate Neuhausen’s and leaders of student organizations. If the hospital had closed it would have been felt by citizens all over Georgia.

Citizens would have lost over 900 inpatient beds and Grady’s specialized traumatized and burn services. The main point of this articles is that Grady hospital is important to the citizens of Georgia because thousands of people depend on it . Which is also who this article is written for the citizens of Georgia who would be affected by the closing of Grady Hospital. Grady is located near the Coca-Cola annex where many of the homeless population with aids have taken resident so you see a lot of homeless people at Grady.  The Arthur of the article clearly supports Kate’s action and so the audience hear a lot about why it shouldn’t close but not about why it was closing.