I didn’t grow up in the church at all. I knew of Jesus Christ but I didn’t know Him for myself. Therefore, I lived my life in the world, I was smoking, drinking, having sex, partying, etc etc. What I didn’t know is that sin leads you down a path of destruction. I was seeking these things to fill voids in me that only God could fill. I got to the point where I was maxed out from sin, I was depressed, contemplating suicide. Without any other options left, I called on the name of Jesus. I had an encounter with Him, and He told me He loved me and wanted me to come back to Him. From there I decided to seek Him. Everyday, I began to pray and read the Word, and my mind began to be renewed and I started to have a peace that surpasses all understanding. As God started working in my heart, the desire for sin started to shed off. Smoking was no longer fulfilling for me, drinking was no longer fulfilling me. I began to find my worth in Christ, so I no longer settled for giving my body away through sex before a man was willing to marry me. The transformation I experience changed my values. I think my experience coming to the knowledge of Christ goes against stereotypes. Many people either see Christianity as legalistic or the other extreme of hypergrace. In other words, people see it as religious people yelling at you saying you can’t do this or do that. Others, think because Jesus died for your sins, that you can do whatever you want which essentially is abusing grace. These stereotypes can make one miss the true gospel of Jesus Christ. My story is stereotype breaking. Because for me, I was not bombarded with legalism; when I encountered Christ, He dealt with my heart first and loved on me. But because of His Word penetrating my heart, my values changed; therefore, my actions did change. Before I knew it, I desired the things that Christ desired for me. My snapshot blog post represent what were considered “womanly duties” in my African American household growing up. I was born in Valdosta, Georgia and I lived in a large house with my parents, grandparents, aunts and cousins. At a very young age the females were taught specific “womanly duties” that consisted of household chores, cooking,catering to your husband, and taking care of the kids. The girls were not allowed to go outside and play like the guys were able to, but were advised to stay in the house and cook and/or clean.My grandmother would always say that she was preparing us for our future husbands.

Art has been a huge part of my life since early childhood. I was initially exposed to art from my grandmother. Growing up, she made me several pieces to display and inspire. Arts and crafts were my favorite past time and I would always try to create something with any material. As a grew older art became a passion for me. It was a way for me to express and communicate my ideas. I also got to see my progression in technique and head space. Art allows me to communicate with people from different cultures and has remained a constant in my life. Even while note taking, if I sketch during a lecture I can better retain the information. Art is essential for me because not only do I have a creative outlook, but I also get clear my head and focus. Just to clear things up I am not talking about one medium or one style, I practice and appreciate all art forms. If it requires creative energy, it attracts me. No matter what I go through or where I travel, art is always there to assist me. It is my foundation and center, even more so than my actual family and our traditions. As we move into the heart of the winter, most cultures have traditions centered around unity, peace, and new beginnings.  These take many different forms, but none are quite as fascinating as the Peruvian tradition of Takanakuy.  Nestled in the remote Andes, the people of the Chumbivilcas province come together in dance, feast, and drink.  The ceremony is one of setting injustices right and moving forward in peace and harmony.  This is achieved through Takanakuy, the Quechua word meaning “to hit each other.”

The exact origins of the ritual are not known but they stretch back through generations.  The Quechua people are known for their resilience.  This resilience extends beyond their ability to survive at such high altitudes to their ability to hold out against the Inca and the Spanish who attempted to colonize their region.  The ritual is also deeply rooted in politics as a way of rejecting the central government’s version of justice by finding their own.

Every December 25, the people of Santos Tomás dance and sing their way to the fight grounds.  Each participant is dressed as one of five characters, each representing a point in their history from swarms of locust to the slave-owning colonizers.  When all are gathered, fighters call out their rival in a high falsetto voice.  They are here to settle matters great and small that have built up over the year in a winner take all match.  Men, women, children, elderly, they all take part in this.  The fight starts with a handshake and ends with a hug.  All grievances are cast aside.  Revelers enjoy a drink with each other before going back to their daily lives.  In a town of just a few hundred people that is an eight-hour drive up the unforgiving mountains,  these fights bring the essential peace and harmony in their wake that allows the inhabitants to once again move forward as a small community. 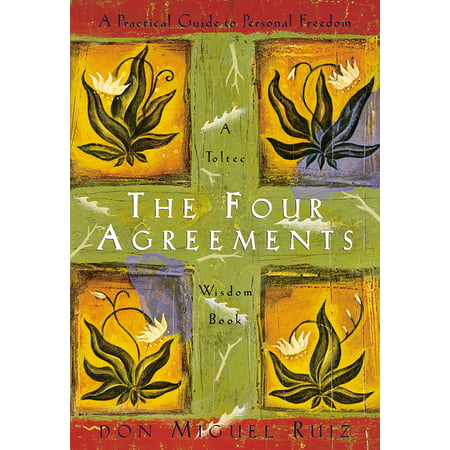 Do you strive for happiness? Everything we do and even refrain from doing is an attempt to move closer to happiness and further from pain. Sometimes it can be tempting to attribute our feelings of happiness or pain to someone or something outside of ourselves.There have been many books written on this very controversy and The Four Agreements by Miguel Ruiz is one that changed my life, forever. Within this book, four agreements are explained very simply and honestly. First agreement, Be Impeccable With Your Word, reminds you to use the power of your word in the direction of truth and love and only say what you truly mean because once said it cannot be unsaid. Second agreement, Don’t Take Anything Personally, points out that nothing anyone does is because of you. What people do is a reflection of their internal state. If it is not your truth, then you have the capacity to be unharmed by it. Third agreement, Don’t Make Assumptions, is a very vital agreement in everyday life. By making assumptions we close the door to truth. You’ll be surprised what you find by asking questions rather than assuming you know what someone means. Final agreement, Always Do Your Best, encourages you to do your best everyday in everything you do even if your best today is different from your best yesterday. Hope this book brings you as much internal liberation and joy as it did for me. Thanks for reading <3 This is a picture of beans on toast, a typical British dish that I have eaten since I was very young. I was born in America, but my mother was born in New Market, England, and grew up with many traditional British values and traditions. Because of this, my mom raised my siblings and me with many of these same mannerisms. My mother was definitely a direct socializing agent of my British side, because without her influence and her incorporation of British things, which she usually showed by certain meals we ate (i.e., Shepard’s Pie, beans on toast, fish and chips), my British heritage would definitely have been lost with how far immersed in American culture my family has become over time. Although this is true, I will keep passing British meals down in order to hang on to our culture, even though we do not have a deep immersion within it. It is still essential to have that connection and make sure it is not lost because no matter how far the generational line, being British is part of my family’s history.

Happy Posting. Let me know if you have any questions  🙂 The painting to the left is a traditional Haitian painting of a neighborhood market. I really like this painting not only because of the bright colors (which is a very common thing in Haitian art) but because how real it look to me. It looks like something I’ve seen in real life when vising Haiti and walking through the market down the street from my great aunt’s house. I especially like the center of the focal point, the man and woman looking into each others eyes as they help each other to lift a basket of yams. My family and I bought this painting in Savannah, Georgia. My family and I, when we first moved to Georgia, used to visit Savannah a lot. We loved going there because there was surprisingly Haitian culture there. We would go up and down River street going into art galleries looking for Haitian paintings to buy and see. We were looking for any sign of our culture in Georgia. When we moved, we left a very large Haitian community; reaching Georgia was a kind of culture shock not hearing Haitian Creole being spoke at the corner store or at church. Before we found a Haitian community here, going to Savannah was really pivotal because it gave us something to hold onto in between visiting out family and culture community up north. Apparently in the revolutionary war, a group of Haitians fought for the United States and lost their lives contributing to the siege of Savannah. Its said that this group of solders were so pivotal to the siege that Savannah would not have won without their effort. The monument is the picture on the right. Seeing our culture on display in such a new place felt amazing. It reminded us that our culture can be meaningful anywhere.