When thinking back to when slavery was prominent in the U.S. , one’s self “image” is something that doesn’t ever come to mind. When someone is thinking of all the horrors and suffering that was happening, I feel a person wouldn’t have time to think of this.

Frederick Douglass did, however, think of his personal image when most today think of creating a self-image as typically included in vanity. But in this scenario, Douglass’ image is what helped him survive.

The way he shapes his image is very careful, you can tell he thinks about it each day he wakes up. He dedicates a lot of energy to his appearance. Having a good self-image is what kept him up during these low times.

In his writings, he shows this ever so clearly.

“To remove the liability of such misapprehension, I deem it proper to append the following brief explanation. What I have said respecting and against religion, I mean strictly to apply to slaveholding religion of this land…”

This quote shows his character very well. When he makes his statements he’s trying to be very specific and not wanting to offend anyone even though most would say he could given what some people have put him through. By being able to say things like this shows that he is strong and caring about humans as a whole. 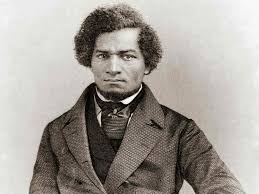 Even when you look at images of him you can see how he wants to present himself. Most images of him look the same; it’s almost as if he was trying to build a brand for himself.  He wanted his face to be known and recognized. He’s dressed neat and well-manicured looking. He’s respectable and more importantly a human being. This is how he was able to grab the attention of transatlantic peoples. They’d remember this face, they would remember how different he looked than other enslaved peoples.

This image is not something that most would draw out when thinking of enslaved persons, and that’s why it’s so memorable. Not only that, but he was an example of what is possible for anyone regardless of skin color. Here in this photo, he is just man, nothing less. It’s photos like these that paved the way for other African Americans of the time.

Above is a photo of Madame C.J. Walker, the first self-made woman millionaire. This is what the photos of Douglass were able to inspire. Excellence can be acquired for any race, gender, or background.

This was his passive way of fighting slavery. Showing people that you can be educated is one of the greatest strengths a man can possibly have. What makes this even more threatening is that Douglass acquired more knowledge than some of the men believed they owned slaves. It showed people that even if you try to dehumanize a person if they are strong-minded then it doesn’t work,

In addition to educated, Douglass was also experienced. Being able to go to different countries gave him an upper hand as well. He was able to look and reflect on his country compared to others. He learned that even other countries are not perfect. The lessons he learned in the U.K. took them and ran with them. He used this as one of the tools in his toolbox to continue his journey