Copy from the iOS 8 site points out that the product will help “you do the everyday things, and the not-so-everyday things, in ways that are intuitive, simple, and fun. And it’s loaded with useful features you’ll wonder how you ever did without.”

I will wonder, “How did I ever live without you, iPhone.”  That’s a bold claim.

Apple creates a buzz around their products that underscores this sentiment. 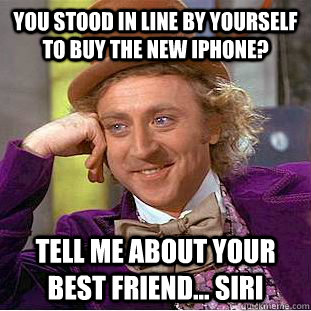 Russell Belk states in his article, The Extended Self in the Digital World, “The Internet and many digital devices free us from the constraints of time and place and create other, virtual, times and places.”  While the devices have their own kind of “intelligence,” the effect they have on their owners is profound­.

The Apple copy regarding SIRI, the AI function on the iPhone and iPad is particularly interesting, claiming that SIRI “understands what you say.  It knows what you mean.”  The latter part of the clause goes beyond simply translating voice-to-text, to a place of near-sentience.  The subtext of the language on the Apple website suggests that an iPhone can be like a personal assistant, something not too far away from a human helper, a human companion that can do lots of things.

The iPhone (or any similar technology) has agency, contributing to a furthering of extended self that bleeds deep into the world of the digital.  While many of our possessions that have temporal physical features, many of our possessions today come in a digital format: music, pictures, records and important documents, contact lists, personal journals, bookmarked websites, research logs, and more.

An iPhone is like a portal to these virtual possessions.

The sharing and social media components of smartphone technology also have implications on the extended self.  Belk states, “many new possessions and technologies…create different ways through which we can meet, interact with, and extend our aggregate selves through other people while experiencing a transcendent sense that we are part of something bigger than us alone (Belk 494).   The desire to connect with other people is part of human nature.  The social media juggernaut Facebook, much like corporate radio, have realized what Matt Silverman records in his interview with author Douglas Rushkoff: “the people paying are marketers. That makes them the customers. And it means [users] are the product being delivered to those customers.”

Newcomers to the social media onslaught, Ello, make the case for a social media network that doesn’t treat the user and the user’s privacy as a commodity, creating a “manifesto,” of which the terminal line reads, “you are not a product.”  The creators would agree with the Adorno and Horkheimer’s correlation to the Marxist idea of commodity fetishism from their chapter on “Culture Industry” from Dialectic of Enlightenment, in which they state, “The culture industry perpetually cheats its consumers of what it perpetually promises.”

Social media often promises connection to a community of people, an aggregated sense of self when, in fact, studies show social media increases the sense of isolation.

In our attempt to aggregate this self through technology, we risk becoming a commodity ourselves.

At this juncture, the question of “smart things” and their relationship as it comes to bear on our human existence seems to open a can of worms, leaving more questions than answers, having opened many doors.  The future is wide open and changes are developing so rapidly, that making predictions about the status of the self, of smart things, and the spaces between, would be impossible.

One thought on “SIRI, you complete me.”