It has become common knowledge in recent years that the work environment is directly correlated to productivity and worker satisfaction. Known as the best place to work in America by Fortune magazine, the company Google has taken this idea seriously and has built an exceptional reputation of employee satisfaction and productivity.

John Blackstone explored the infamous offices of Google. Their HR department, called the People Operations Department, uses scientific data to create the perfect work environment. The people responsible in this department have data on how simple greetings, power naps, wall colors, treadmill desks, garden spaces, bikes, and more promote the health and happiness of the worker. 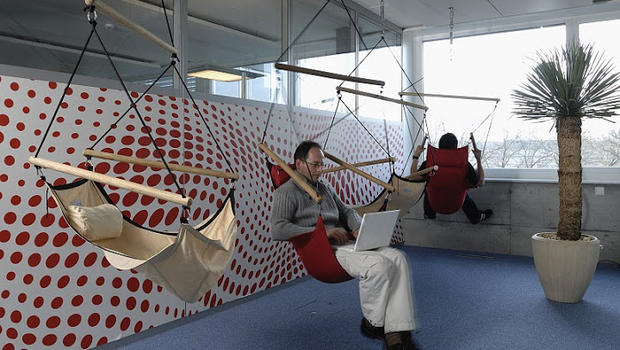 They have also used data that showed how unhealthy snacks the company provided were negatively affecting their workers. Instead of completely cutting out unhealthy snacks, they utilized their built environment to influence good decision-making. By providing healthy snacks that were more accessible on the shelf than unhealthy snacks, and color-coding them based on how healthy they were, they influenced the workers to choose the healthier options and worker satisfaction and productivity increased. This is reminiscent of Sarah Schindler’s article, “Architectural Exclusion,” in which she explained how placing foods strategically could influence food choices.

This source has provided a perfect example of how the interior built environment influences human behavior. If more companies worldwide implemented interior design ideas that encouraged employee happiness, productivity would increase. Google has broken up the monotonous design of the office and created a worker friendly, and productive, workplace.

Natalie Slessor informs her readers how the design of a workspace influences the behavior of the people who work there. She argues that seeing as though a structure needs people to be considered a productive place of work, it only makes sense that “we should intricately study people, behaviour and psychology before designing a working place” (Slessor).

The cost of creating an ideal workspace for employees is often cut be companies because of how expensive the research and implementation can be. However, Slessor explores the ideas that not only can we cost effectively analyze employee behavior, but that the cost is worth the outcome of increased productivity.

By creating the ideal work environment, Slessor explains that there must be choice and variety. 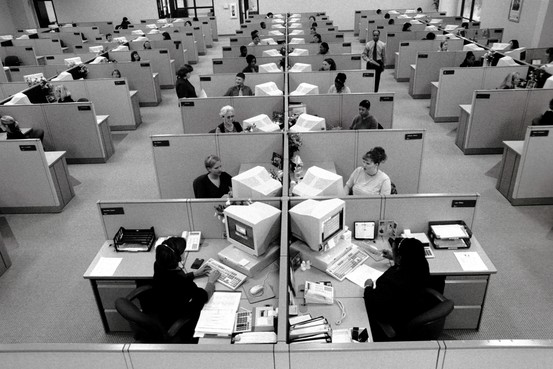 Providing the right space for the kind of work the employee is doing is ideal. For example, cubicles may work for accomplishing individual work, but an open, colorful, and comfortable meeting space is better for meetings in which workers have to brainstorm innovative ideas. Had the ideas of utilizing the interior built environment to create a productive workspace been utilized regularly by offices, such as government offices in Atlanta, the employees would have a less hostile working environment and be more motivated to work. The ideas that Natalie Slessor communicates in this article are implemented at the company Google, as learned in John Blackstone’s report, “Inside Google Workplaces, from Perks to Nap Pods.” At Google, the HR department has invested in human behavior research to create the productive work environment that Slessor is describing.

In this article, Jeannie Suk addresses the current hot topic of gender-neutral bathrooms. According to Suk, laws in several states have been proposed that ban people from entering a bathroom designated for the opposite biological sex, despite gender identity. These proposals have been surfacing due to the rising issue of the right of transgender people to use the bathroom of the gender that they identify with.

A huge debate over an ordinance in Houston arose because it allowed people to enter bathrooms based on their gender identity. As discussed in many articles, such as “Making Bathrooms More Accommodating,” by Emily Bazelon, this ordinance was met with heavy opposition. Both Bazelon and Suk point out that those who are against transgender people entering the bathroom because they don’t want men to prey on their daughters oversimplify the situation that transgender people are in. This thinking also relates to society’s history of criminalizing homosexuality and “sexual deviance”. In the past century, views on the government’s role in our lives and the right to privacy have shifted laws that once criminalized homosexual sex acts to now adhere to the needs of a changing society.