The Built Environment influences many facets of our lives, whether we realize it or not. The way a community is designed fosters how much individuals participate in physical activity and determines the overall health of its inhabitants. Buildings, themselves, have a larger impact than one might realize on physical activity. The distance between buildings and destinations can attribute to one’s health, as well as whether or not a building is a mixed-use building. The purpose of the buildings, like whether it is an office space or housing, plays a central role in physical activity. Parks and recreation services provided by the community can attribute to an individual’s health. Transportation throughout the built environment is a key determinant of how much the community is active and how healthy they are. Our overall health is heavily dependent on the built environment around us, so it is critical that we understand the ways the built environment affects us, and also, how we can modify and improve our surroundings to our benefit.

The parks and recreation aspect of a community largely impacts the physical health and activity of the community members. Many people think about huge, expansive forests that have little to no trace of human intervention, when in reality, a park is just a large public green area used for recreation. The existence of a park or recreational area in a community does wonders for physical health. Studies show that when members of a community perceive and acknowledge that they have access to a park, people are two times more likely to use these spaces and participate in physical activities than those who do not perceive or acknowledge that they have access to a recreational or green space. People often take for granted green spaces that are available to them because a countless number of people would use these types of areas regularly. The only factor holding these people back is that it just is not possible because there is no green space and that their community has not invested in one yet.
Another study shows that the density of these parks directly relates to the amount of energy people exert through exercise. The word density, in this instance, refers to the way people objectively view an activity regarding the number of individuals that can take apart in the activity also with the amount of space needed. As you can see in the graph, open space is ranked fourth, behind basketball, tennis, and playgrounds. The sports of basketball and tennis are the top two due to their low input requirement concerning space needed. Both sports have a relatively small court, or playing field, compared to the other sports, baseball, and fishing, that are lower on the graph. They are also both very inclusive with the amount of people that can be using the space at one time. On average, there are four people playing tennis at one time. In basketball, there are always ten people playing in one game. These spaces are minuscule in relation to many of the other activities that can be available at these parks; however, they produce some of the highest physical output at the parks. This information shows us that communities and cities do not need to set aside vast areas for these parks, which land area is a probably in many of the communities without a green space.
Parks and green spaces also serve a pivotal benefit to mental health as well as physical health. Nature has always been a desired aspect throughout human history, but it has always been more of an aesthetic rather than something we need. Today, many studies are showing that nature and green spaces are very beneficial for our mental health. Day to day stress from our hectic 21st-century lives have been proven to be relieved by taking a stroll through nature. Stress is on the rise in America, according to the American Psychological Association,

44% of people report that their stress levels have raised significantly over the past five years. Shown in the graph, stress levels in all aspects of the American adult life have risen higher than the point that they were immediately after the collapse housing market and economy in 2007. Parks also can immensely help or even cure some of the chronic diseases that are on the rise in society today. Studies indicate that by just sitting or eating outside significantly impacts an individual’s psychological health. The people that go on the occasional hike have significantly lower blood pressures than those who do not. Parks and green spaces are pivotal for our mental health, especially in today’s society that seems just to become more and more stressful as each day passes.

Transportation in the Built Environment

Transportation is very intertwined with people’s health and physical activity. People on average, according to studies by the Center for Disease Control, Transportation Authority, Urban Land Institute and the United States Department of Health and Human Services, are willing to walk a half mile to public transportation stations or leisure destinations like a park or restaurant. Most people would consider anything over that half-mile mark to be too far and too inconvenient to walk too. One factor of this fact is that many individuals do not simply have the time to walk a mile or so to transportation. One study shows that people who regularly use public transport get almost three times as much as much physical activity compared to those who rely on their cars as transportation. The recommended amount of physical activity for the average person according to the U.S. Center for Disease Control is 22 minutes. This same study shows that the average public transportation commuter gets about 19 minutes of physical exercise, which is just 3 minutes under the required amount of physical activity. Along with the purely physical benefits, public transportation improves our environment by the reduction of pollution that is pumped out into our atmosphere. Air pollution is becoming a critical issue because Asthma is on the rise in America. It is increasingly becoming harder and harder to breath, so public transportation is a critical way to help curtail the increase in pollution. The built environment of public transportation is immensely important for our society’s mental and physical health.
Cars have become an issue for the public’s health in the recent years. The invention and implementation of cars completely changed the landscape of society across the globe. David Nye stated, “The automobile was an enabling technology that permitted greater dispersion of the population”. The car enabled people and businesses to move away from the nucleus of a city and spread out. This phenomenon became known as Urban Sprawl, which is defined as the uncontrolled expansion of urban areas. This phenomenon is the main reason behind the megalopolises we see in American today, like New York City, Los Angeles, Atlanta, the list could go on and on. As Urban Sprawl has brought economic growth and prosperity, it has also brought severe adverse consequences. The plague-like spread has caused many farmlands and open spaces, which could be used for parks, to be swallowed up and transformed into highways and strip malls. Urban Sprawl is singlehandedly threatening many ecosystems in the U.S. The influx in cars has added an incredible amount of air pollution into the environment, contributing to the rises in respiratory problems like asthma. Suburbanization, the shift of the population from the central urban areas into the surrounding sub-urban areas, commonly known as suburbs, has also brought negative side effects upon many people. Inhabitants of the suburbs are subjected to higher levels of obesity, heart disease, and high blood pressure. The cause of these health issues is the heavy reliance on cars as a means of transportation.

As seen in the graph, the number of vehicles in the city has decreased, while the number of cars in the suburbs has skyrocketed. The suburbs are often very spread out, requiring people to use their cars instead of walking miles to their destination. This then leads to people having significantly less physical activity, and ultimately resulting in these adverse health effects. 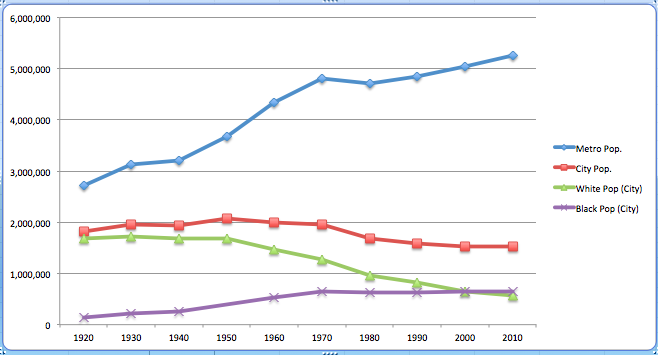 What We Can Do

The built environment is crucial to our health, so what can we do to help improve the conditions all around us? The most important thing that the built environment relies on is policies and planning. People can get involved in their communities and voice their opinions on what they want to happen. Advocating for parks is one massive step that can be taken. It takes minimal construction, as we have seen, and it is the most compact areas that produce the most physical activity, which requires less development and available space to build. Another pivotal point to fight for is public transportation. By simple just using public transportation more, there will be benefits for the individual as well as the overall population. You, as the person, will experience significantly less stress along with reducing the pollution being put into the environment. On top of just using the public transportation, the support for more and better forms of transportation can go a log way. Everyone’s health is significantly impacted by our surroundings, through planning, we can have an impact on how our environment treats us.

Kane, Amelia. “Understanding the Relationship between the Built Environment and Public Health: Its Significance and Why It’s   Essential for Urban Planners. | HGOR.” HGOR. Accessed October 2, 2016. http://www.hgor.com/understanding-the-relationship-between-the-built-environment-and-public-health-its-significance-and-why-its-essential-for-urban-planners/.